After his last Kickstarter failed to fund, Jerry knew he needed to expand his marketing efforts if he wanted his new campaign to succeed. So, heeding the old Henry Ford maxim that “Stopping advertising to save money is like stopping a clock to save time,” he decided to go all in on Facebook ads.

The only question was: “Would it work?”

Lessons Learned from a Failed Kickstarter

Before he launched again, Jerry took a long, hard look at what went wrong last time.

“The biggest lesson I learned from my last failed campaign was that you can't launch with no audience. I thought that the same people that backed me in 2012 would come out to back me five years later. I never kept in contact and didn't warm them up before launching Ferrofluid. I didn't even tell anyone the book was going to launch on Kickstarter before I launched it. I was thinking that I had 30 days, so I had plenty of time. I didn’t.”

So Jerry got to work. First things first: he found a supportive community. Working within the ComixLaunch Course, Jerry had a group of like-minded creators who wanted to see him succeed.

“The whole community was really helpful. Anytime I asked a question, it was answered quickly and genuinely. A couple shout outs would go to Brant Fowler and GeoffWeber who seem to answer every question posed on the group. A big shout out to the man himself, Tyler. It's always really helpful when he pops in to answers our questions.”

With his lessons learned and support system in place, Jerry turned to the next weapon in his arsenal: 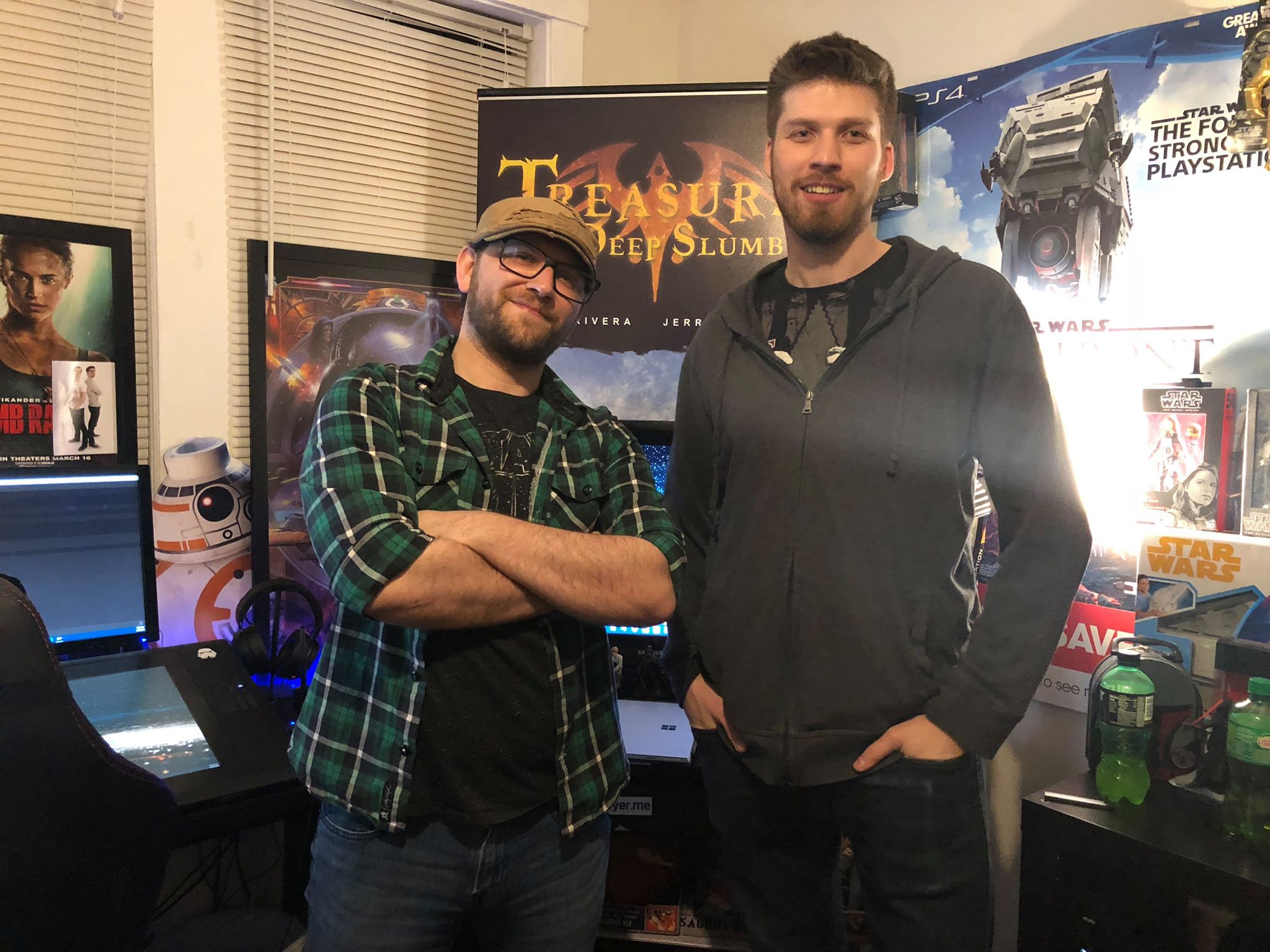 The Power of Collaboration on Kickstarter

When I asked him to name the one key to the success of the book, Jerry doesn’t mince words:

In fact, Jerry is quick to stress that the entire campaign was a team effort. He credits his collaborator, Samuel Rivera, for doing most of the legwork in building enthusiasm for the book.

“I knew people were interested in Treasures of the Deep Slumber because it's all Sam would talk about whenever people found out he's an artist. Sam's passion cultivated an audience over the last several years… I didn't know how warm the audience was, but it turned out they were hot and ready to go.”

Jerry compares this experience to his previous campaign and sees a big difference.

“The first 48 hours after launching opened my eyes to how much Sam's passion made people want to support his vision and our project. The first night we launched, I was at Sam's house with some friends having a launch party and once we hit launch and sent out the links the pledges flooded in. High dollar pledges that brought us to just over $1200 in a few hours.”

Once again, he credits his collaborator with stoking demand for the high tiers.

“[It’s] a symptom of Sam’s passion. The people that pledged at the high levels, especially in the beginning, were people Sam knew in real life and had shared a passion for his art over the years. By having a high tier available we were basically giving them permission to pledge at that dollar amount.

“We listened to our audience too. People told us they wanted their name in the book as a producer. So we created a $500 tier to accommodate… The other high level reward a few people pledged at was our two statue levels… Out of all of the rewards this one excites us the most.”

But as anyone who has run a Kickstarter knows, to be successful, you can’t just rely on your existing audience. You have to expand it. 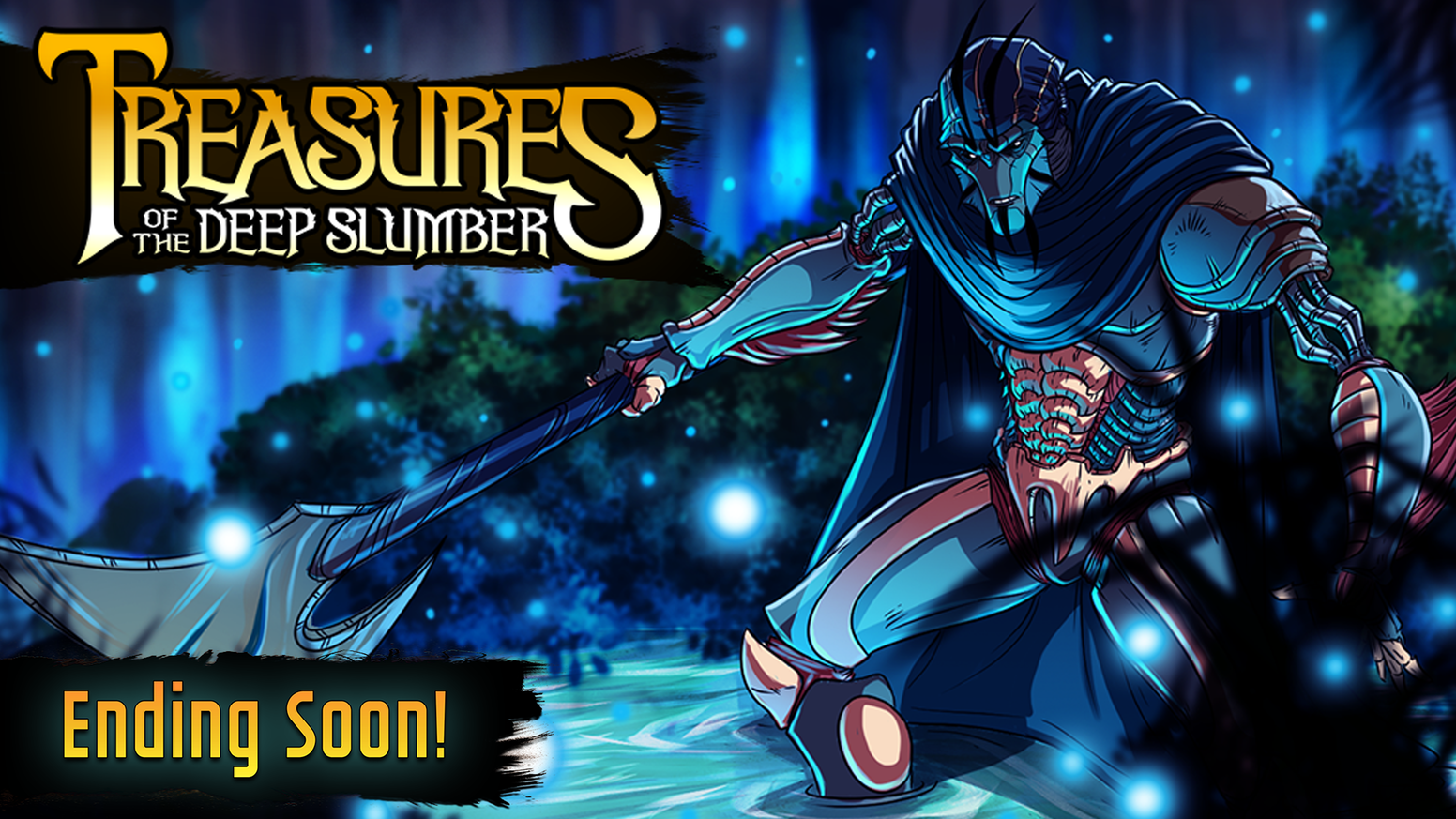 How to Use Facebook Ads to Drive Traffic to Your Kickstarter

Because Jerry was a member of the AdLaunch community, he knew that the key to a successful ad campaign comes well before an ad launches.

“I really wanted to utilize the power of Facebook ads for this campaign. At the beginning of the year, I put a Facebook pixel on the Treasures of the Deep Slumber website. We then tried to send people to the site whenever we would discuss the project. The website was filled with character bios and designs plus a preview comic.”

By placing the Facebook pixel on his site, Jerry was slowly but surely building a warm audience for Facebook to serve ads to. These wouldn’t just be random comics fans—these were Facebook users who were now already somewhat familiar with the book.

“The first ad set we ran was targeted at the pixel audience. We started running ads on May 31, sixdays after launching the campaign. We started small with a $5 per day budget. I took Tyler's advice and just left it. I let the ad run for a week before reassessing. Our price per click was just over 20 cents, which I knew was great. We were seeing some decent conversion, so I upped our daily budget to $20 a day. That drove about 100 people to the Kickstarter daily.”

With a big opening day behind them and an ad strategy in place, Jerry felt good.

But not everything went so smoothly. 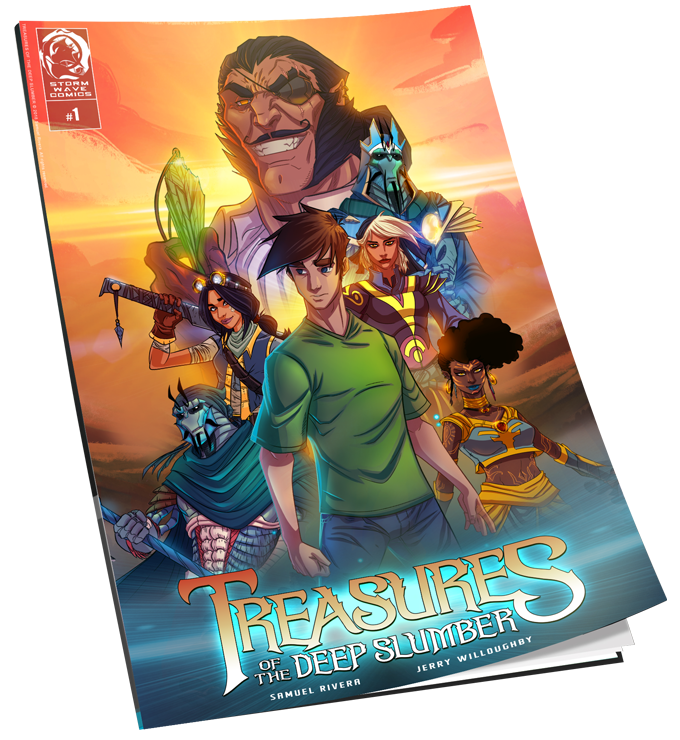 How to Use Facebook Ads to Survive the Kickstarter Dead Zone

But the one thing that did work?

“The biggest benefit for running the Facebook ads was that I didn't worry about getting the word out, especially during the dead zone. I knew that my ads were running and people were seeing them and visiting the campaign page. This differed from my previous campaign. I didn't set up analytics until partway through that campaign and didn't know if people were visiting. For Treasures of the Deep Slumber I knew that the page would speak for itself. I just needed to get people to it.”

By “setting it and forgetting it”, Jerry could relax, secure in the knowledge that new people were finding his page.

But for the final week, Jerry changed up his strategy. 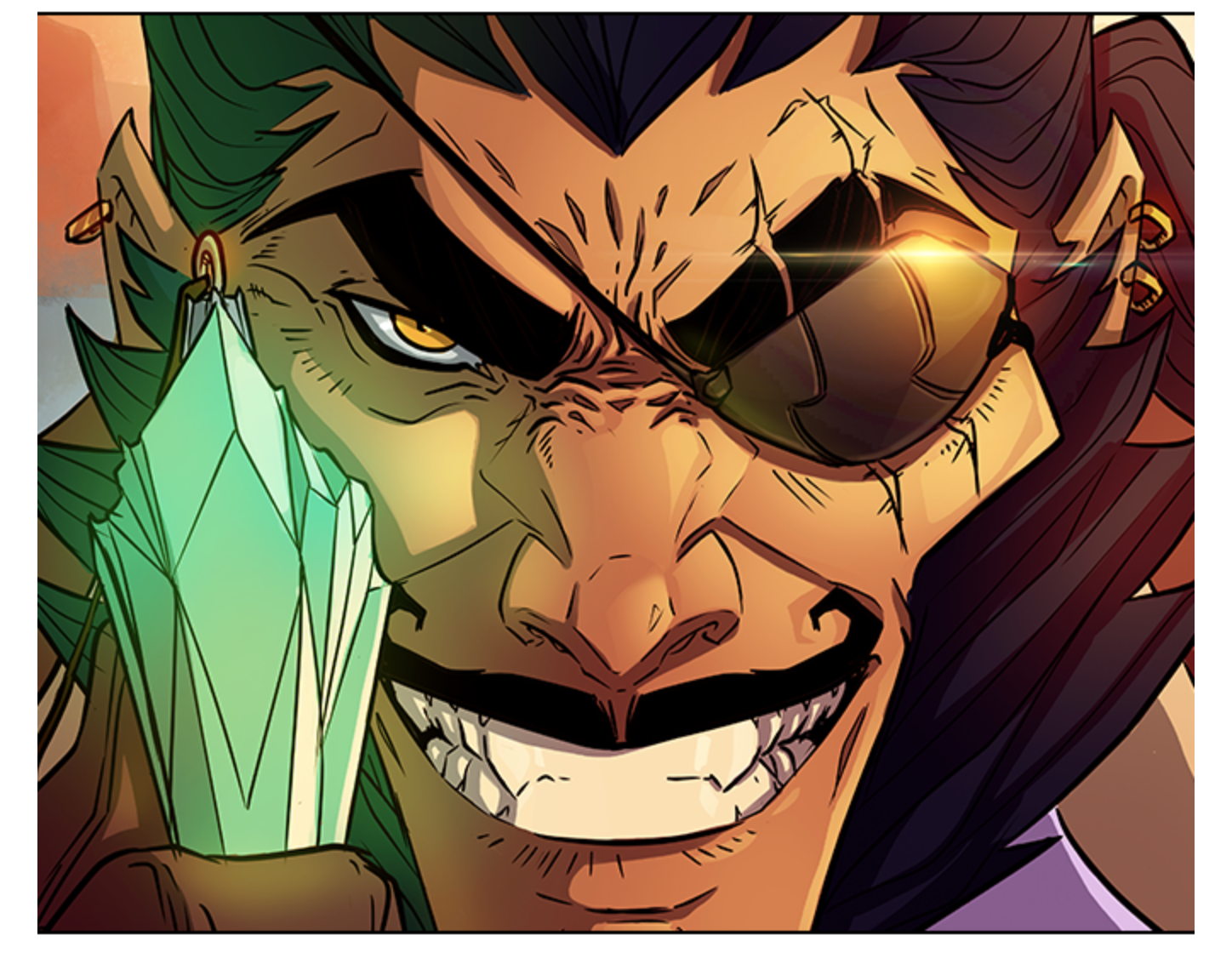 “I made two new ads to run in the final days. One that ran the three days leading up to the last day and one that ran the final day. Both ended up being under 30 cents per click. In total we spent just under $300 which brought in somewhere between $550-800 in pledges. We had a reach of 27,500 people of which 2,500 clicked on the link. From there, somewhere between four and twelve pledged. (I give the range on both the dollar amount and the number of pledges because I would invite anyone who liked the ad to like the comic Facebook page, and they may have converted at a later time.)”

These ads were targeted to a different crowd than his warm audience ads.

“[These] ads were targeted at Image comic fans. My rationality was that our comic doesn't fit into one specific genre. It's a sci-fi / fantasy / pirate book. I could've run multiple ads for each demographic, but I thought that people who are fans of Image comics are fans of high quality independent comics… I think our book could fit right next to an Image book, and I figured our audience would agree.”

In the end, the book achieved 250% funding, with half the backers being complete strangers. For Jerry, it was an eye opening experience.

With the campaign finished, Jerry and Sam have moved on to the next challenge.

“The comic now needs to be completed. We have some pages, but the bulk of the book is yet to be drawn. We've given ourselves the remainder of the year, which breaks down to 2 pages a week.”

Then it’s on to printing and fulfillment.

“Once the book is printed, we will be taking it to conventions and building up an audience for the next Kickstarter launch for the next book in the series. 2019 will the year of Treasures of the Deep Slumber!”

We don’t doubt you, Jerry. 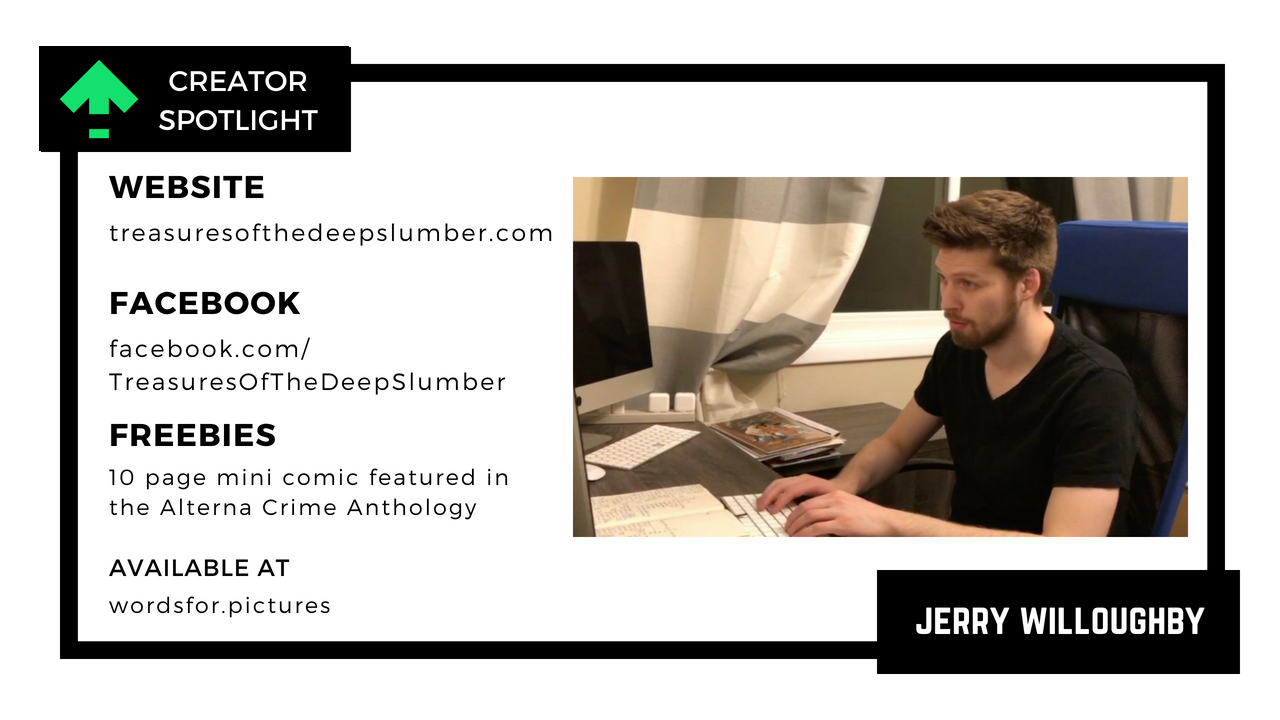 Would You Like to Learn the Strategies Jerry and Other Talented Creators are Using to Take Your Launches to the Next Level?