“I look back and laugh at the mindset we had when we did Zuda. We were all like, 'It's all just a popularity contest! The best written/drawn comics aren't winning!' and now I'm like, 'Duh! Of course they are! The people who are winning are the ones who are best marshaling their audience to show up and support them!'

This insight hammered home the importance of building your own audience before a launch.

“Pretty much for the entire time we were creating and posting Impure Blood we had no way to capture our audience and weren't getting it out there in any way other than showing up at cons. We had a very passive strategy, if you can even call it a strategy.”

That's when Nathan made an important decision. 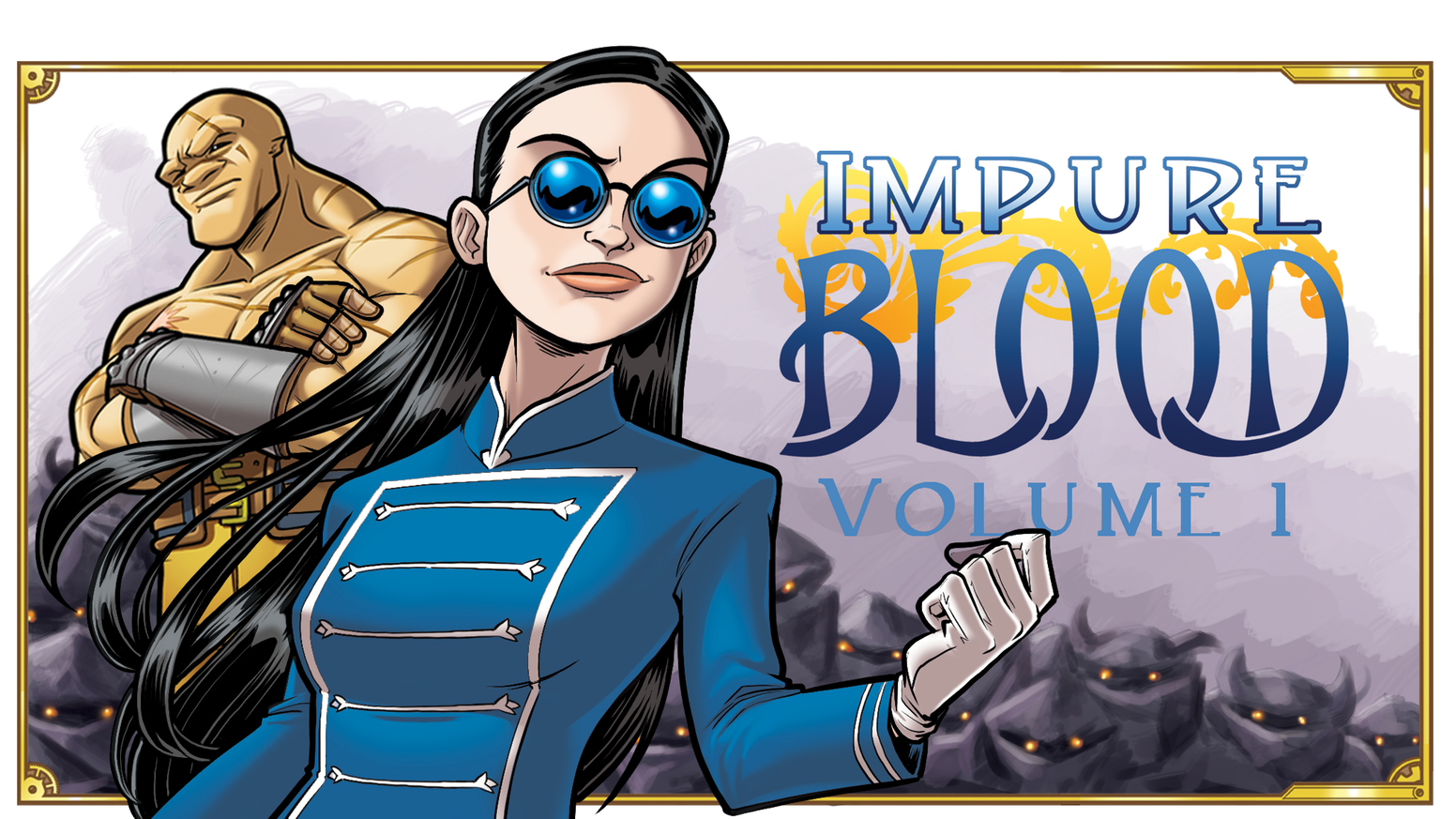 Why It’s Important To Finish What You Start

After the Zuda competition wrapped up, Nathan and his collaborators chose to grind it out, spending nearly a decade completing the webcomic.

Having a finished product helped them in a few big ways:

"People seem really intrigued that this was the first Impure Blood book with three more waiting in the wings. Movie studios going all the way back to Lord of the Rings have really primed people to the idea, 'We have this franchise and we're going to release a new one every year for the next five years.'"

Not only did that help them build buzz, it also made the book an easier sell at cons.

"I cannot tell you how many fans at conventions are like 'It's finished? Thank god! It drives me nuts when XYZ creator starts something and then just drops off!' It makes us a safer investment. The reader knows they aren't going to be left hanging with a story that may not finish. Plus, it shows that we're reliable and can be counted on to finish a project. And, I mean, we put this much effort into Impure Blood when we were barely getting any money for it. Imagine what we'll do if we have an actual budget!"

How to Build Your Audience Before A Comics Kickstarter Launch

Another benefit of finishing: audience building.

After almost a decade of producing Impure Blood, Nathan had an audience he could rally. There was only one problem: as commenters on his webpage, he couldn’t easily reach them.

“I spent the entirety of 2019 building up my mailing list and tracking down established fans specifically for the purpose of launching this Kickstarter. I think I got most of the most reliable followers and commenters.”

But his audience building efforts didn’t stop there.

"[We also] signed up new readers at cons throughout 2019, and spent money on more than a few viral email builders."

With his audience ready, it was time to launch.

Nathan’s strategy for rallying the troops before launch day paid off in a fast start.

Then the Dead Zone hit.

“[W]e had to fight tooth and claw for every hundred dollars or so. I scheduled very little of my social media posts and email blasts, and I was just getting sick of trying to come up with something new to say every other day.”

Nathan decided he needed to “take his foot off the gas” in order to recharge his batteries. It was a necessary step, but it made him see the value of scheduling social media posts ahead of time.

“I definitely felt a lot of uncertainty and was figuring out how to prioritize things as I went a long. Almost all the social media posting I did was reactive and on the fly, with very little scheduling, so as a result I didn't post on social media as much as I could have. Some things I kicked down the road a bit too long, others I spent too much time on. A lot of the banners I wish I had done ahead of time. I whipped [them] up as I went along.”

Nathan found himself in the same boat the weekend before the end of the campaign, when he attended a convention… with no scheduled social media posts.

“I took my eyes off the campaign… and when I looked again on Sunday we had only gained about $100, making it the slowest weekend of the entire campaign…. Next time I plan on having posts, graphics, and promotional ideas lined up in advance. I also think I'll build in some rest periods during less critical times so I can charge up that final hill rather than take a nap on it.” 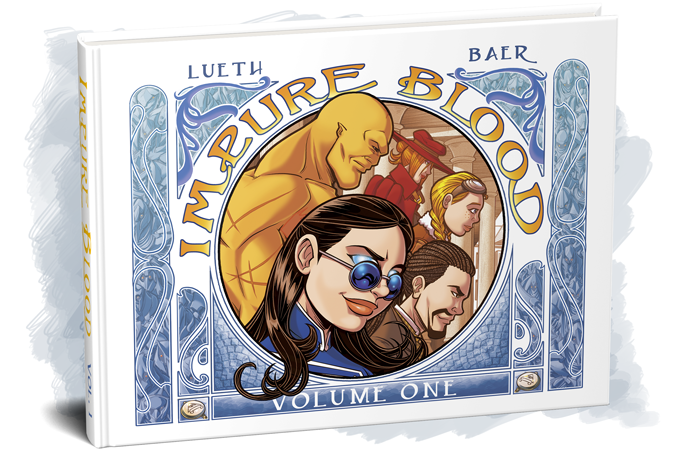 The Difference Between Persistence and Stubbornness

Even with a few missteps, Nathan funded to the tune of $9,081, off the strength of 205 backers. He credits a simple formula for success:

“My joke answer to this has always been, 'I'm either persistent, or I'm too stupid to quit.' Over the last decade, I've learned that persistence is great, but only when combined with thoughtful analysis and an eye for progression. Without those last two things, persistence is indeed just being too stubborn to quit.”

Nathan understands that success leaves clues, and by observing the hard work of others, you can set an easier course for yourself.

“If what you're doing isn't working, poke your head up from your drawing desk for five minutes and look at the things other people are doing that are working. Hard work and industriousness are great, but they need to be guided by planning and intention.” 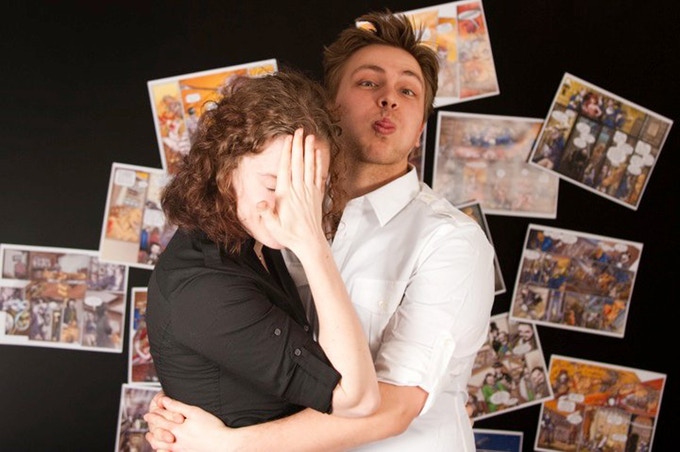 “As this is my first KS, I feel it's important to fulfill in a timely fashion, demonstrate to new readers that I'm a reliable factor, and achieve my stated goal of launching another campaign in Autumn 2020.”

Nathan plans to keep rolling on Kickstarter until the next three deluxe hardcover volumes of Impure Blood  are printed. And then?

“Using that momentum to launch a new comic series by the end of 2021.”

Would You Like to Learn the Strategies Nathan and Other Talented Creators are Using to Take Your Launches to the Next Level?