Erin Ptah had a plan.

She’d filled out her spreadsheets, worked carefully to build her sales page for the "Leif & Thorn" Kickstarter, and come up with a guiding philosophy that would see her through all phases of the campaign.

Now she just had to execute.

Like many successful business owners, Erin knew that before she even made a sale, she needed a guiding principle—a philosophy she could always fall back on in the face of difficult decisions. So she settled on what would be her mantra throughout the Kickstarter:

“The philosophy is, the more variables you introduce, the more opportunities you give yourself to screw up. Since this was my first time fulfilling a Kickstarter, it was important to keep those down.”

Her strategy for Keeping it Simple largely revolved around avoiding what Erin calls “shiny objects.”

“The ‘shiny objects’ are mostly literal. Some comic Kickstarters offer a whole drawerful of them in higher tiers—stickers, pins, keychains, posters, and so on. None of them were things I’d offered before, so adding them would’ve meant a whole new round of ‘research companies, compare prices, learn the jargon, choose between product options, ship and review a test copy’—all while I was doing the same thing with the book itself.

Instead, I stuck to rewards I had prior experience with: mini-prints from a vendor I had used before (VistaPrint), and lots of custom art.”

With her guiding principle in place, Erin got to work. 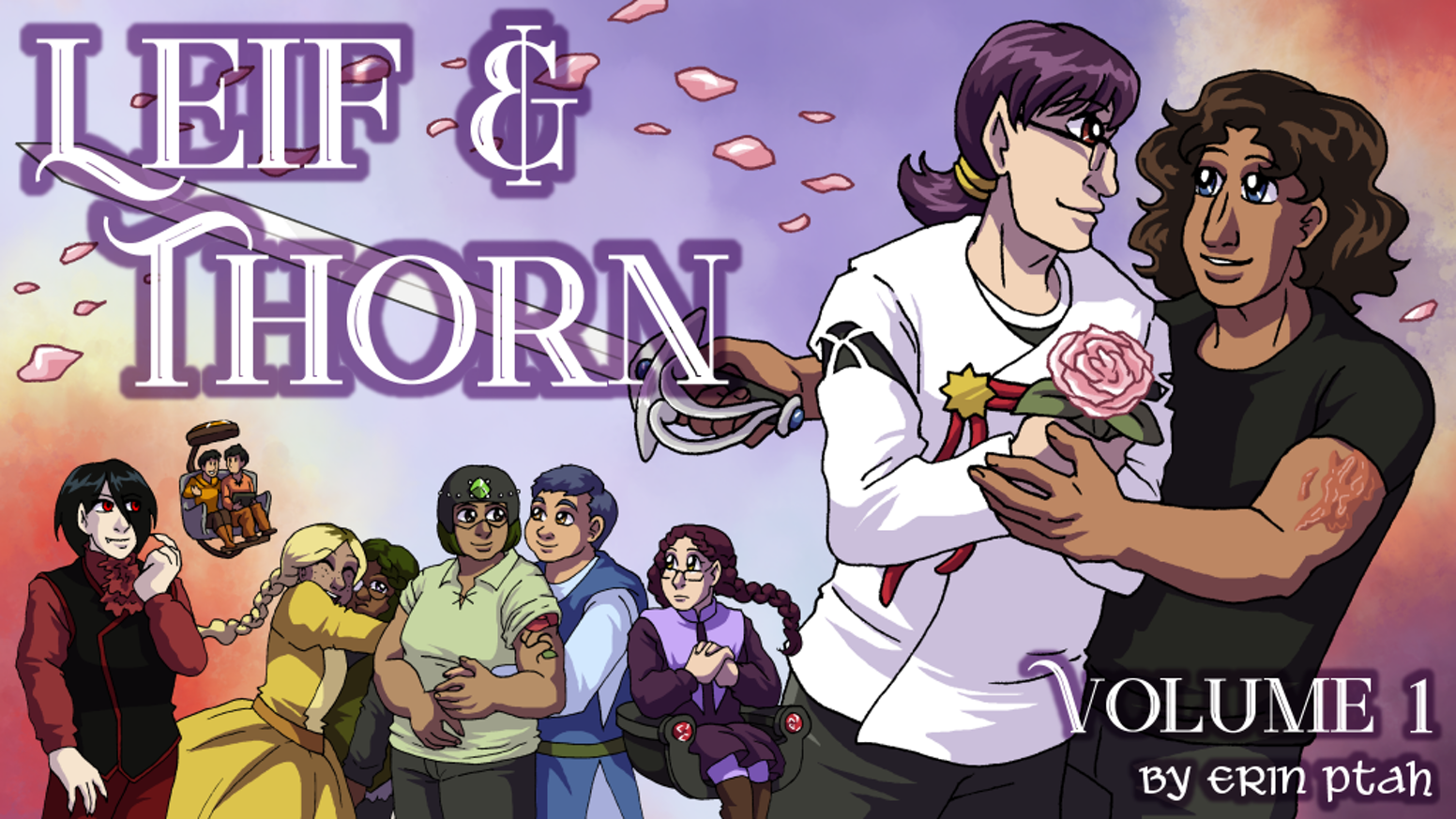 How to Keep it Simple by Keeping it Positive

While building out her page, Erin knew that Keeping it Simple would mean standardizing certain reward tiers instead of allowing backers to customize them.

“[For] example, there was a signed-and-sketched-book tier, and I didn’t let backers specify what their sketch would be. Because [accidentally] shipping someone the wrong book and having to make up for it would get pricey, fast. (One artist told a story, I think it was on Spike Trotman’s podcast, where someone diligently filled all her orders from List A with books from Variant Pile B, and nobody noticed until after she started getting ‘wrong book’ emails by the dozens. It, ah, made an impression.)”

But in a world where people often expect to “Have it Your Way” (to borrow an old Burger King slogan), Erin knew some might see this as a negative. Her solution? Get proactive—and keep it positive.

“I explained the no-custom-sketches part in the FAQ, and could’ve framed it as an apology, but instead I rolled it out as a trust element—a manifestation of the ‘keep it simple’ plan. Backers could feel reassured that I wasn’t going to get carried away with wild promises, then fumble the whole thing and leave them hanging. I was being mindful about only offering things they could be confident they’d get.” 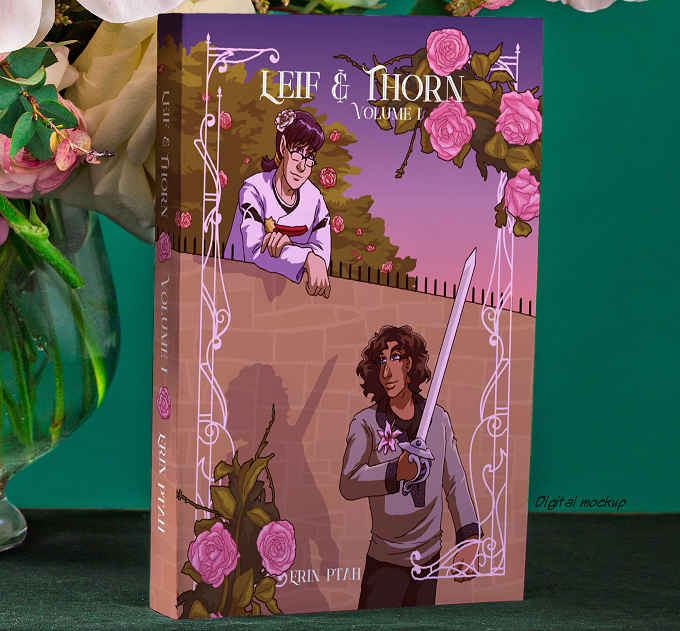 A Simple Way to Get More Kickstarter Funding

One reward Erin knew she could deliver without increasing her expenses was an idea she borrowed from Project Wonderful.

“Project Wonderful was [a now-defunct] advertising service that was a great fit for indie creators of all kinds—Etsy shops, self-published writers, and a ton of webcomics…. [I]t was a good steady source of new traffic.

“After the PW ads went down, I replaced them with Google AdSense, but figured I probably wasn’t the only one missing PW. So in the Kickstarter, I made a $2 tier where the reward was ‘your banner ad will be in Leif & Thorn’s header, rotated with a few others, for 2 weeks’—and shared the news on webcomic-specific forums and Discords, like the ones for SpiderForest.”

The reward tier was a hit—even more than Erin expected.

“I hadn’t offered any higher tiers with longer ad buys, but people grabbed the low tier, did their own math, and pledged for $10 or even $20.

“The AdSense revenue from that banner, over these past two weeks, was $1.86. Which, once you subtract Kickstarter’s cut is pretty close to what I was getting from each individual backer. So however many backer banners I ran concurrently, I was multiplying the value of the space by that amount.”

But the benefits didn’t stop there.

How to Keep it Simple During the Kickstarter Dead Zone

Part of Erin’s strategy involved a novel way of surviving the Dead Zone: Not being 100% prepared.

“Don’t have every single thing prepped and ready to go before the campaign begins. Leave yourself some graphics to make, some copy to write, some milestone rewards to package. That way, even on a day when nobody pledges, you can finish one of those, check off the box for it on your checklist, and feel like you made progress that day.”

Thinking of the Dead Zone in this way—as extra time to complete all the tasks you couldn’t do before launch—has the added benefit of reducing the amount of work needed up front.

Keeping it Simple During Fulfillment

But Erin didn’t stop there. Her guiding principle even carried her through the fulfillment phase, especially when ordering bubble mailers.

“You can get these in various colors and patterns—I found a pack with the exact shade of blue used on the comic’s website, and another with a rose motif that would’ve matched the roses on the book cover. For only pennies more than the bland off-white ones!”

But even though she was tempted, Erin decided keeping it simple might actually be more beneficial in the long run.

“[B]land mailers, the simple option, can be used for other projects, and don’t have any risk of patterns rubbing off in the rain. And I’d already invoked ‘for pennies more’ on upgrades that were genuinely important, which this... wasn’t. So I got the cheap envelopes. Lowered the price even more by ordering a [quantity] that’ll cover me for at least two more campaigns.”

An added benefit of keeping the packaging simple? It allowed her to add a personal touch:

“I drew the comic’s 'cute cat mascot' character in Sharpie on the blank surface, and backers have been so delighted they’ve posted at least as many photos of their envelopes as their books.” 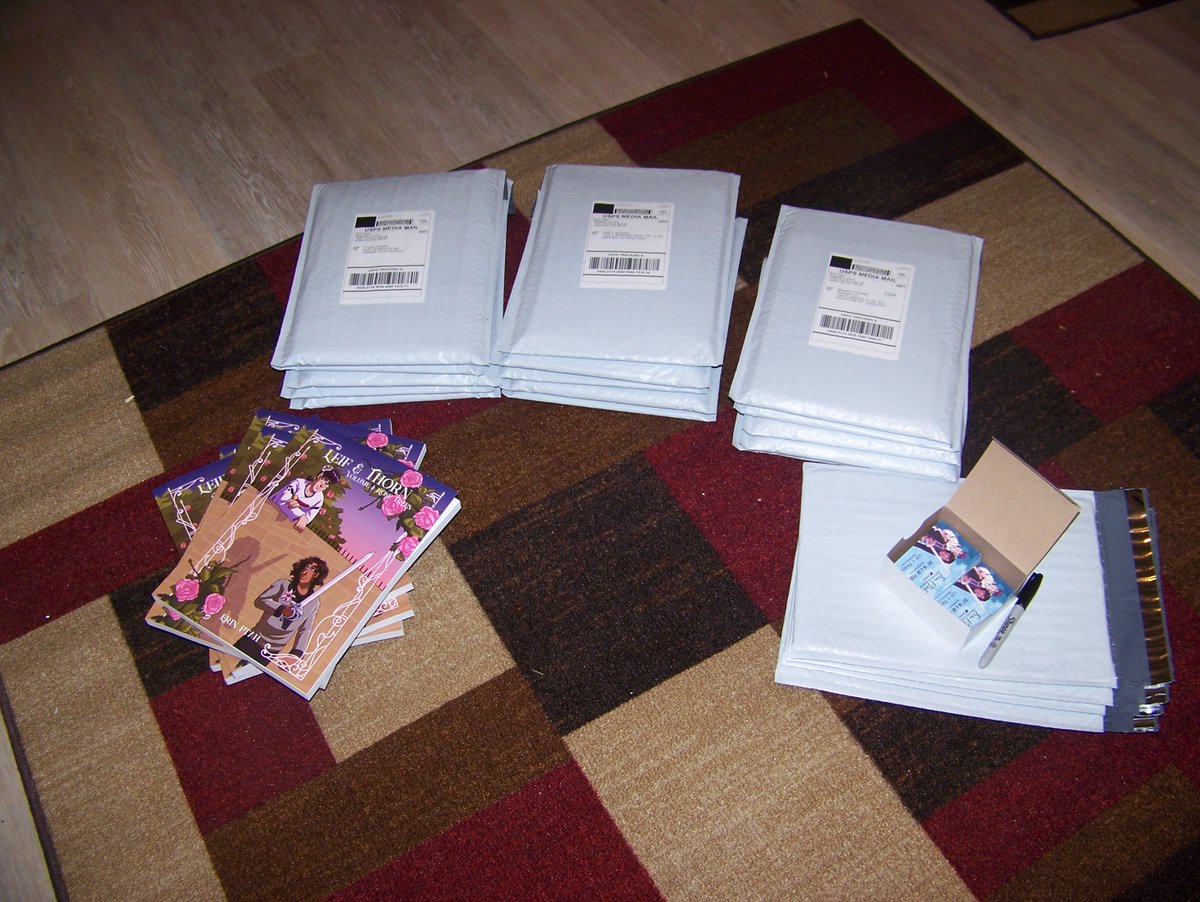 No surprise, Erin plans to keep it simple moving forward. She plans to post her comic to Webtoons in order to pick up more readers, and will continue to update on a regular schedule. And then?

Would You Like to Learn the Strategies Erin and Other Talented Creators are Using to Take Your Launches to the Next Level?